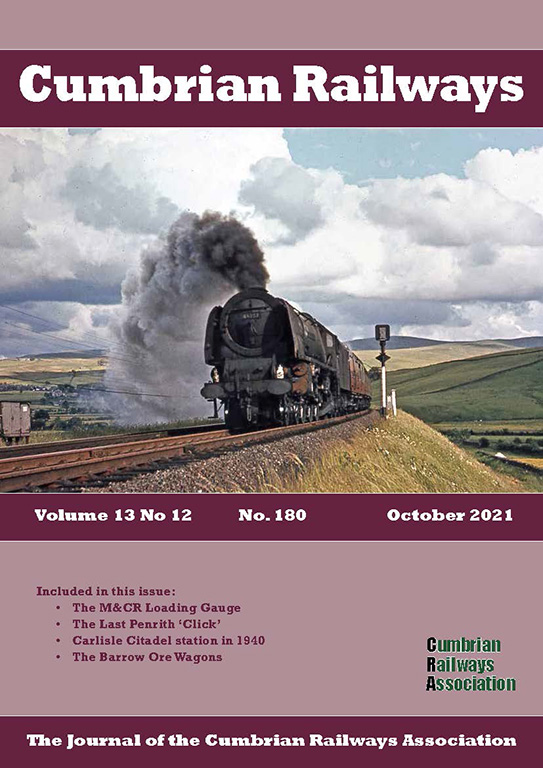 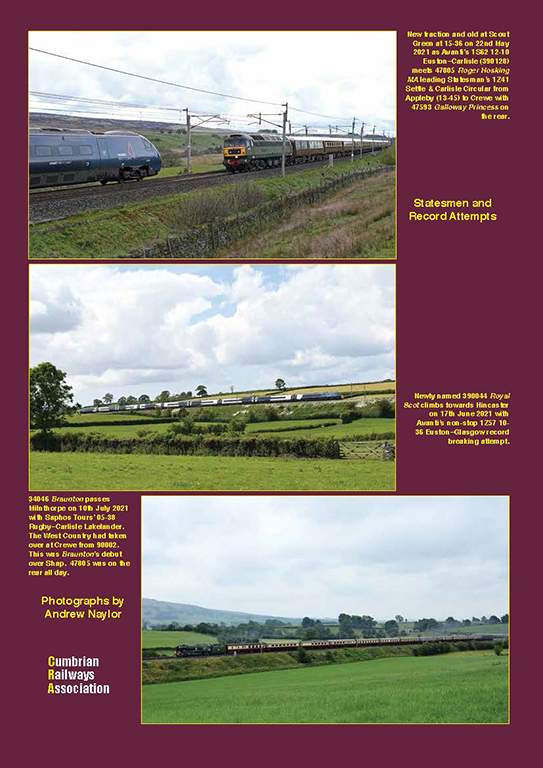 EDITORIAL
This issue of Cumbrian Railways heralds the completion of another volume, and the usual index will follow along as soon as we can get it assembled. Looking back over the last three years of Volume 13, it is interesting to note that we have been able to publish the results of the members’ researches as well as making sure we record what is happening on the current railway in the county. This will continue to be the case, as most of our members seem to enjoy the wide coverage we can offer.

The recent announcement of the organisational changes to the railways with the introduction of a new body, Great British Railways, will have an impact on how the railways are run and how we continue to enjoy them in the future. Information is scarce at the moment, though John Peel, in his inimitable way, has been able to sum up what is known so far, and he will, of course, keep us informed about developments as they unfold. It is interesting to read that this might all come about in 2023, one hundred years after we were robbed of our truly local railway systems. The current trend is to name the operating groups by their original names — Great Western Railway, LNER, South Eastern and South Western Trains to name a few — so the new organisation might also delve into the past to give us back the Furness Railway and, perhaps even, the Maryport & Carlisle Railway.

It would also seem that again our beloved county of Cumbria is in the sights of the bureaucrats with the proposal to divide up the existing county into two unitary areas, East and West Cumbria. East Cumbria will consist of Eden district, Westmorland and Barrow, whilst West Cumbria will be made up of the current districts of Carlisle, Allerdale and Copeland. Whether the names for the new groups will continue to be used seems uncertain or if some other names be thought up is also in the air, but my suggestion is that one of them should become just West Cumberland. I am also unsure if these two new bodies will be considered as separate counties (like East and West Sussex for example) or retain some sort of cohesion between them.

One thing is certain however; the Cumbrian Railways Association will continue to report on any of the new railway incarnations and to serve both of the new county areas as it has always done.

Due to pressure on space in this issue of Cumbrian Railways, the last part of Brian Quayle’s series, recording the listed railway structures of interest, has been held and will appear in the next issue. This final part covers the buildings and structures of South Lakeland District. It will conclude a very interesting record of the structures that have a protected future, though there are many more that perhaps should also receive such protection and perhaps in time they will be added to the list.

I was very pleased to see the very interesting account of railway activities in Carlisle between July and December of 1940. It was interesting to read the efforts taken to prevent the recording of details of operations, as they could be considered to have been of use to the enemy, but many years later these notes can provide us with an insight into life at the time. One fact that the originator, John Taylor, did not record was that, on Saturday, 7th September of that year, I was born in a house just a stone’s throw from Etterby Junction. He did, of course, make a record of the railway activities on that day and John M Hammond has kindly let me have a copy of the notes relating to this Saturday’s child (who, according to the old rhyme, works hard for a living, so no change there!). If I was excited to see what momentous happening occurred on my birthday, I was a little disappointed, though it is great to be able to see what actually happened and my thanks to John for letting me see the record:

To be fair, more disturbing things were happening on this day; the Luftwaffe moved away from attacking the south coast airfields and other strategic targets to starting its terrible bombing of the east end of London with the RAF having to adapt its tactics to defend our capital city from the new menace.

For the first time in a very long while, I have had no letters sent in for publication. Your views are very important to us, so please continue to put pen to paper whenever you can.