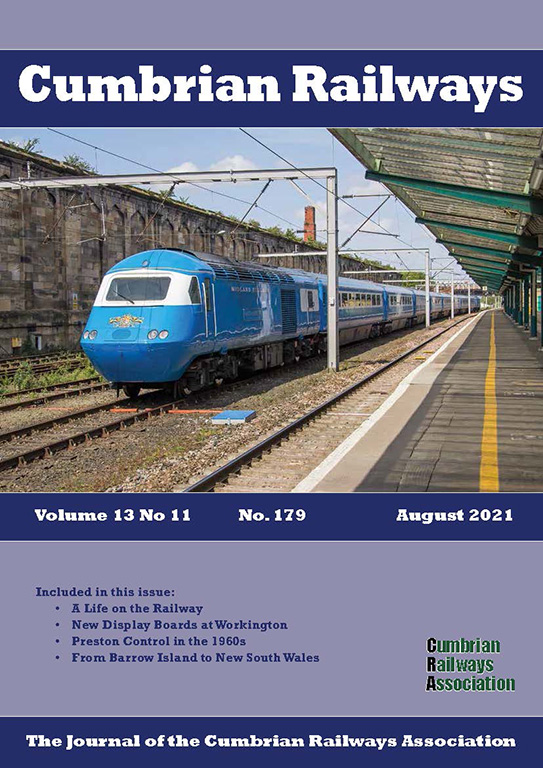 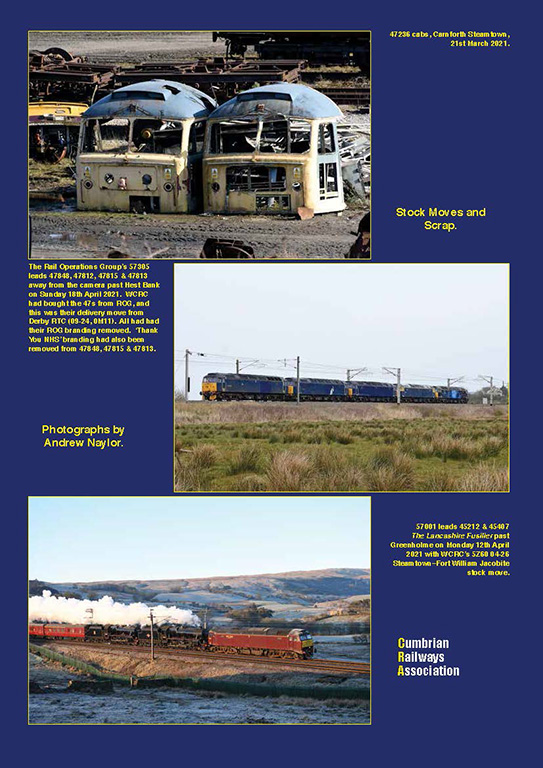 EDITORIAL
'Where has the time gone?’ is one of the most frequently-used phrases when you reach a particular age. This phrase, however, could be no more apposite when I learned that shortly we were going to celebrate Furness Railway 175. It seems not long ago that a group of enthusiasts, including CRA members, celebrated the 150th anniversary, and achieved the impossible. They managed to give Old Coppernob the chance to see proper daylight again and more than that, in her old stamping ground. The culmination was a wonderful celebration, held over two days, and hosted by the Lakeside and Haverthwaite Railway. Surrounded by her admirers, and with real smoke coming from her chimney (courtesy of a theatrical smoke generator), she witnessed the carnival atmosphere. Many were in period costume and Queen Victoria herself graced the proceedings, whilst the Kendal Silver Band played heartily in support. The band played a selection of rousing tunes, though one of them I did not feel was appropriate. Amongst their repertoire was a selection of marches from the soundtrack of the film ‘Battle of Britain’. The piece of music in question prompted me to sneak behind the musicians to be able to read the title on their music scores. I was right — the questionable piece was ‘The Luftwaffe March’ and it would have reminded our old friend of the night they visited Barrow and destroyed her home, bringing back unhappy memories. As I write, we still have to see what is on offer for the forthcoming 175th celebrations, but I am sure it will all be entertaining, given current restrictions.

Talking about our present predicament reminds me that there is a remarkable record of how the pandemic is affecting us in the reports provided by John Peel. As well as recording the impact on our railway services, he also records how normal life is having to be conducted. This is much appreciated, as it is important that we record history as it happens and look at the wider effect the virus has had on us, which allows to put everything into perspective.

A few days ago, an announcement was made by the Transport Secretary, Grant Shapps, about the future of our railways and the formation of a new body called Great British Railways; to be a new and fully integrated public body to take control of owning and maintaining infrastructure, collecting fare revenue, and running and planning the network. Franchising will remain in one form or another, but it is certain that change will occur and our railways will take a different path. Let’s hope that it will be an improvement for the users and with a bit of luck, their concerns will be taken into account. Whatever happens, I hope we can record these changes within the pages of Cumbrian Railways. Whatever direction the railways take, I hope we shall be able to record things as they unfold.

Within this issue of Cumbrian Railways there is a report of the inauguration of Workington station as an historical centre for reflecting the illustrious past of the town. A team of CRA members, led by Brian Quayle, have advised and assisted with the production of three display boards covering the long history of the railways in the town, to be placed along the wall of one of the platforms. Well done Brian and his team for again putting the name of the Cumbrian Railways Association firmly in the limelight.