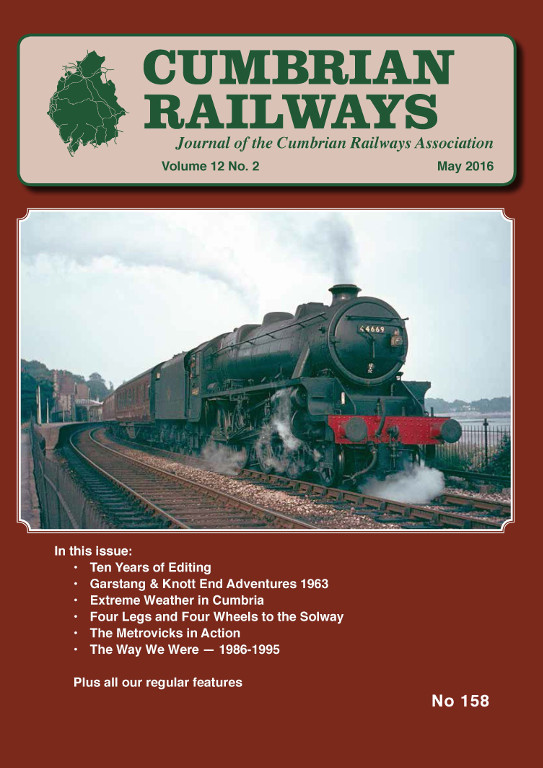 I am very pleased that David Joy, the first editor of our Journal, has written a piece for this issue giving an insight into the early days of getting ‘the word’ out to our members. However, there is one thing he did not mention. It was David that came up with the new name, Cumbrian Railways, for what was then called the Circular, the change occurring with the start of Volume 4 in June 1988. It was an inspired choice of title, snappy and succinct, and describes perfectly the coverage and content.

Continuing with the theme of including an article that was first published in a previous issue I have included the article on the The Port Carlisle Dandy that first appeared in October 1986. This subject has always been a personal fascination and it was only when I checked thecontent of previous editions of the Journal did I see how popular it has been. In publishing John M Hammond’s article again, it has given the chance to include a full range of photographs to support the text. I am also pleased to be able to include another superb drawing from the drawing board of Mike Faulkner. His drawing of the station building is the result of his lunch-breaks spent at Port Carlisle during his working day and he was able to measure the remains of the red sandstone plinth that had been the station building. Other results of his free time being well spent were featured in the article in Volume 4 No 7 entitled ‘Lunchtime at Port Carlisle’ which included a drawing of the seat from Dandy Car No 2 in use as seating at the bowls club.

Our 40th Anniversary is also being promoted in a number of ways, including the launch of a range of beers to mark the occasion. Please make sure you try it.

Part of the promotion that goes into making our Association stronger is the sort of thing outlined by Philip Tuer in our ‘In My View’ column. Philip has worked tirelessly to make people aware of our existence and it has also helped to boost our membership numbers. You might ask why we should increase our numbers and the answers are varied, though an important point is that a sustainable number of members keeps our costs down in all spheres of our activity. One advantage is that the more copies of our publications we print, the less is the unit cost and thus going towards keeping membership fees stable.

It is hoped that we might be able to reach a total of five hundred members in our anniversary year and you can all do your bit by getting involved with the drive to reach this number. A copy of the new membership application form was sent to you in our last mailing and if you are able to pass this on to a friend or acquaintance and encourage him to join, we would all benefit from it. I’m sure a lot of us have friends who are teetering on the edge of signing up; I know I am aware of some myself. It is just a matter of being persuasive and getting them to sign on the dotted line.

I was not able to get to the recent meeting in Carlisle for family reasons, as the wedding of my God Daughter had to take precedence. From all reports, it was a very successful weekend and was very well attended. Whenever we have our Spring meeting in Carlisle, we share the weekend with what we call t’other CRA— The Caledonian Railway Association — and at their meeting, John M Hammond gave them a talk based on his writings on the Quintinshill railway accident, the centenary of which we commemorated last year.

We are building a close relationship with our neighbouring railway associations and one manifestation is the collaboration to construct a database for our photographs. Whilst distinct and separate, each of our databases is at least using the same software to list and record our respective collections.

Dave Richardson is getting to grips with our very large collection of photographic images and we are slowly getting them added to the database so that when inquiries are made, a series of images can be selected, together with the basic information about those pictures. Given the size of the archive, good progress is being made and over a period of time, all will be in place.

It has been pointed out that the train shown in the photograph of Milnthorpe station on page 24 of Cumbrian Railways 157 is an ordinary passenger train, not an express. The headlamp is in the lower position on the smokebox door because of electrification. My apologies for not spotting the error.