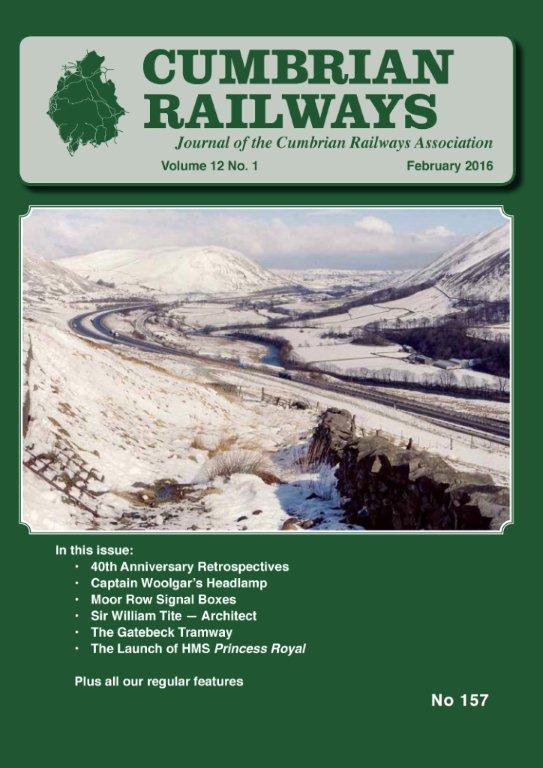 This issue marks the start of a new volume of Cumbrian Railways, as well as marking the beginning of our 40th anniversary year. To mark this anniversary, we are reproducing some of the groundbreaking articles that have appeared in the early issue of the Journal. Each one has been revised and updated wherever necessary and of course we are now able to include photographs, a luxury denied us in the early issues. It is fascinating how things have developed over the years and we have to appreciate the power of the modern page-setting software. The selection of articles to be republished has been made by taking a ten-year period for this and future issues. In this issue, we have taken articles that appeared in our first ten years.

As I write this, devastating floods have again visited Cumbria and the damage caused is again great. The heartbreaking task of cleaning up has just begun and, surprise, surprise, the politicians have donned their designer wellies and have actually ventured north from Westminster. The television crews, up to their armpits in waders, were also present (why do they always have to stand in the water?) At least it allowed those at a distance from the County to see the effects of the deluge for themselves. There will be an analysis of the damage done by the floods and their impact on the train services in our next issue, but at the present time, the system is not yet back to anything like normal.

The dreadful events have also had a potential impact on the production of Cumbrian Railways, as some of our regular contributors were unable to prepare their pieces because of the widespread power cuts. All has come good, however, and the copy is now in and it reflects, in a small way, the stoicism demonstrated by the residents of the county to get on with things. Again, I am proud of my City of Carlisle!

At the end of September, I spent a glorious two days manning the Association’s stand at this year’s Scaleforum. It proved to be a worthwhile exercise as I was able to meet a number of members and was able to discuss with them their thoughts on the CRA. I was also able to sign up a new member and hopefully made others think of joining us. The Pochin models were on view and they attracted a lot of comment and interest. Many of the visitors were of the age that remembered Ross’s writings on the construction of the models in the modelling magazines. Time and again the Association was congratulated for saving the models and keeping them safe. Because of them, more people have became aware of us.

Following the publication of the photograph taken at Sellafield used on the cover of Cumbrian Railways 156, Rae Montgomery wrote to me, pointing out that he had taken the photograph and gave more information about the scene shown. Rae donated his collection of slides and photographs a number of year ago, and whilst he gave us a full description of each image, these have not been transferred to the database records, an omission I will see is corrected so that his valuable information is available to enable proper captions to be composed as well as being a valuable record of the events depicted. He writes as follows:

"In fact I travelled on that 16-25 Sellafield workers’ train from Sellafield to Moor Row on 4th October 1963 with Fowler 4F 44505. At Moor Row, the carriages were placed in the sidings and the loco then worked a goods train to Corkickle. I travelled there with the guard in the freight brake van. The photo also shows steam emitting from a loco on the Down line, and this was a Co-Bo D57XX Class, though I failed to record its number."

Following on from the note sent in by Rae Montgomery, the Elves that look after the production of the Lakes Express at the Seascale álfheimr have also been in touch with us, giving more information on the photograph at Sellafield. As well as pointing out that the train shown would be the workers’ service to Egremont and Moor Row, they note that both Up and Down workers’ trains also ran from their respective platforms and at times all three trains could be in the station at one time, if not leaving simultaneously.

Another error crept in which was entirely my fault. The locomotives featured in Andrew Naylor’s photograph at the bottom of page 451 of Cumbrian Railways 156 were incorrectly given names in the caption. Andrew has pointed out that these two engines, Nos 57004 and 57008, do not carry names. My thanks to Andrew for pointing out this error and my apologies to him for adding erroneous information to his caption. As he points out, Cumbrian Railways is very much a journal of record and it is very important that the information it contains is as accurate as possible. To complete the story, it is DRS engine No 57304 that carries the name Pride of Cheshire and No 57308 is called County of Staffordshire.