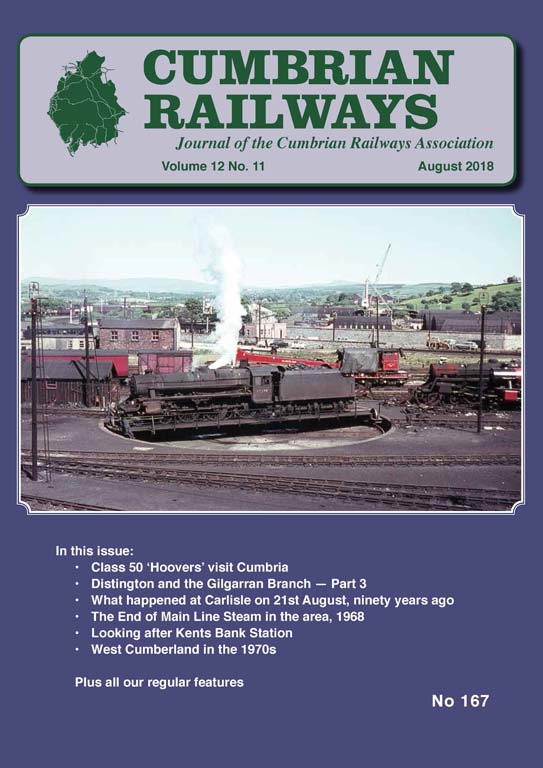 EDITORIAL
In general terms, I would always consider our membership to consist of people living in the county, those of us that have moved away but still have a love of the area or those that are fascinated by the complexity of the railways serving the county and the rich history that accompanies them. This, perhaps, is a simplistic view of those that are happy to be members of the Association and there will be other reasons for retaining membership.

Some of you have discovered the county’s railways whilst visiting Cumbria to take the beauty of its lakes and fells and perhaps adding this interest to an already existing love of the Iron Horse. These people follow in the hallowed footsteps of those Cumbria-philes going back many years.

I was talking recently to someone that had helped with an article for the Journal and he said that he had a strong wish to revisit the area after a long while and would also like to learn more about its railways. However the love of his main railway history precluded his getting involved. Not wanting to miss a new member, I told him that even the smallest grain of interest would be rewarded by joining up. Whether he does remains to be seen, but I do hope so.

Many important and influential visitors came to the Lake District. Prior to the railways, we have Celia Fiennes and the Reverend William Gilpin in the eighteenth century, through to The Picturesque and The Romantic movements of the early nineteenth. When the local railways established themselves, their focus was on work and not pleasure, but later on, and with the decline of their earlier traffic, the railways turned more and more to the latter for their revenue.

The Furness Railway is famous for its organised tours as were the LNWR and the CKPR, though a lot less is known about how the latter two companies operated their tourist traffic. There are also the services provided by a number of other railways. Initially it was the well-to-do that took advantage of the offerings of these railways but they became keen to take advantage of the increased leisure time of the ordinary British workers. There seems to have been little work done on the services offered by the railways outside the county. I am aware that the LYR, the LNWR and the Midland ran trains into the region, either as complete trains or by the provision of through coaches. As well as direct access to the Lake District, the resort of Silloth was also served by the North British Railway, which begs the question of how train services were operated to serve that very ‘Scottish’ Cumbrian town.

If anyone has made a study of the wider tourist traffic, I would be very pleased to hear from them and perhaps we might be able to extend our knowledge of how other companies provided their services.