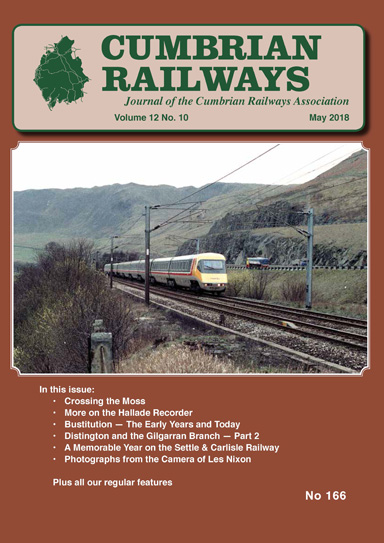 I have been keeping up with the various happenings in our area and am amazed by the reports of continued poor service on the Cumbrian Coast Line. There was a glimmer of hope that the dear old Class 37s operating the loco-hauled services were to be replaced with something a bit more modern (and more likely to improve the operation of these trains). The hope was dashed when it was announced that this would not happen, but subsequent information came in saying that a start would be made, and Monday the 12th March was the revised date. This did happen as planned, with one set operating in top’n’tail mode by using two Class 68s, but with one coach missing from the set. This is to allow platform positioning using existing stop boards. The other set in use remains as a four-coach unit, hauled by a single Class 37, and retaining the DVT at the other end.

Initial responses to the first part of Richard Foster’s detailed article on Distington and the Gilgarran Branch have been very good, a number of members saying that they wait eagerly for the next part (to be found in this issue).

It is a fitting testament to the extensive research work Richard has done on the subject. He has unearthed a lot of detail on it from a wide range of sources, and it will all go to make the history of the station and the branch as complete as it could ever be. It is important that subjects like these are researched and written about, not only to record their histories, but also to give us an insight into the working and operation of some of the long-gone features of our local railways.

Further to my note in LX 95 about setting up a chronology team, this was brought into sharp focus with the production of the large-scale map, which should soon be published. It was found that there was no one source of information on the stations that had appeared on our lines over time. Any available information is scattered over a number of sources and it would be nice to have members search these details out to form a comprehensive chronology/gazetteer of Cumbrian Railways. I am slowly trying to get something together but any assistance in this task would be a great help. Above all, it would be nice for another person to verify the accuracy of the material that is available.

Following Trudy Harrison’s ‘In My View’ in the last issue, her Parliamentary assistant has been back to us with a request for some historical background detail on a few points for some research Trudy is doing. Naturally we are more than pleased to help, as we do with a number of other queries we get in. Answers to another query from a researcher lead to him joining and we are very pleased to welcome him.

Another query came in to us from Ann Lingard, who was researching the Solway Mosses. I copied her request onto the chat line and, in a short space of time, Ann’s questions had been answered. With her research complete, Ann sent me a piece on her work, which is featured in this issue of Cumbrian Railways. As well as showing the power of mutual help, it also gives us access to other aspects of our railways rarely covered in publications like this.