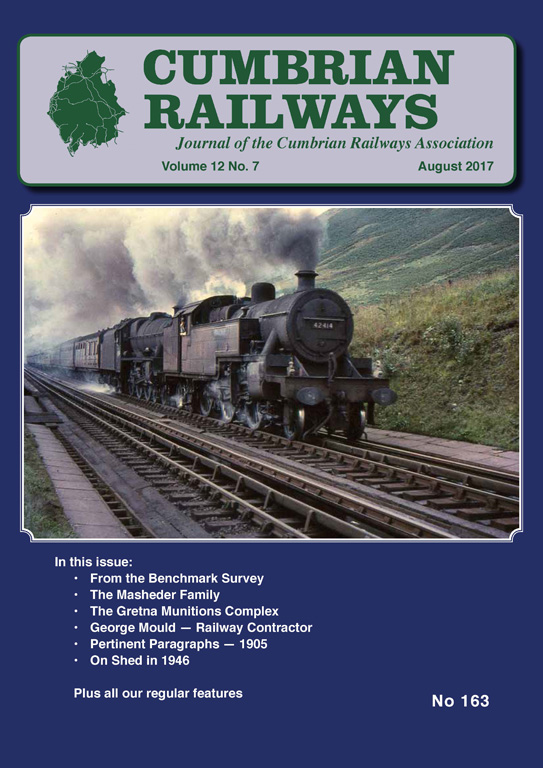 This issue contains some very useful follow-ups to articles published in Cumbrian Railways 162. It is good to see that these articles are bringing forth further information and it is personally pleasing that members are making the effort to add to the collected knowledge. The subject of the comments is the comprehensive coverage of the munitions factory complex at Gretna by John M Hammond and it throws a spotlight on a very little known aspect of the struggle to prevail in the Great War. Without giving too much away, we have another ground-breaking article to follow, describing how the ambulance trains in the period were operated in the County, used to bring home the physically and mentally scarred victims of the output of another ‘Gretna’, this time deep in Germany territory. It is sad to consider that the war had developed into a deadlock where the only perceivable progress was stupidly considered to be in hurling hundreds of tons of steel projectiles at each other.

Whilst not wanting to repeat the contents of this issue as shown in an adjacent column, I would bring to your attention the wonderful work of David Gibson and his colleagues in the Benchmark Survey of the local railways, conducted as part of our 40th celebrations. A brief selection of photographs to give an idea of the breadth of the survey is given in these pages, though the entire collection of images will eventually be available through our photographic archive print service. There is still time for you to add to this record; David would be very pleased to hear from you via e-mail from HERE. A photographic record of your local or favourite station could also form part of an article covering the railway stations within the bounds of the Association’s coverage. With some historic photographs added, it would make an interesting read, so if you would like to consider doing something along these lines, please get in touch with me.

Whilst I was putting together the piece on the shed and locomotive allocations for 1946, it stuck me that there were a few sheds missing and it would be useful if this gap could be filled. It would also be nice to be able to cover other periods and the types of locomotives operated locally and I would be very pleased to hear from anyone who can add to the 1946 allocations or come up with schedules covering other periods.

Now a question: What does a wardrobe found in the south west of the United States have to do with the railways of Cumbria? Answer – well, nothing at all, but it is included (on page 274) as an indication of what could have been the extensive migration that occurred in the late nineteenth and early twentieth century and as illustrative of how better known we are getting from our web presence. We have a number of queries on railway matters and some which are from people seeking reassurance of their travel plans. Graham Worsnop was able to help one enquirer wanting to travel from Carlisle to Gosforth via Seascale. This help included assuring her of the method of getting the train to stop where she wanted it to do so, as well as a suitable telephone number to arrange for a taxi to take her forward from Seascale. With Graham’s help, we have another satisfied customer; one that would not want to become a member but at least will remember us well after her visit to Gosforth is over. That’s what we should be about.