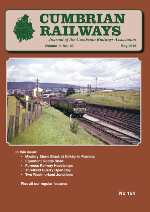 It is fair to say that we have been heartened by the response to the Membership Survey that was sent out to members with the last mailing. At the time of writing, over 100 replies have been received. This equates to about 22 percent of the membership sending in their forms, which is a very high percentage of the membership. As well as being able to gain a good idea of what you think about the Association, it also brought forward a number of people that were willing to take on some of the jobs that need to be done to develop the services we provide. It will take a while to sift through the offers but at least everyone has been contacted to thank them for their offers. A resumé of the replies received will be circulated to all the membership as well as being available on the website.
One of the series of questions asked was the particular railway interest of the participants. Most of the lines featured high percentages of support and it struck me that it was perhaps a good idea to see if some special interest groups could be formed, covering a lot of the more popular lines. Some of the highest interests shown were on the Cleator & Workington Junction Railway, the Cockermouth, Keswick & Penrith Railway, Furness Railway and the LNWR in West Cumberland. The latter, covering the original WJR/C&WR lines and the Cleator Joint Lines rated particularly highly.
A Special Interest group could act as a focus for research into the lines and the gathering and recording of the available information. Identifying and cataloguing our photographs could also be undertaken thus increasing the usefulness of our photographic archive.
If you have an interest in these lines and are willing to get involved in setting up an SI group, we would be very pleased to hear from you and any such offers could be promoted in the pages of Lakes Express. With all the positives shown in the Membership Survey it is evident that a lot of you want to get involved more.
One area very much lacking is something on the railways in the north of the County. I have had a very good article submitted for a future issue but it would be nice to have more on this fascinating group of lines. Part of recent changes means that I now have a hard drive with our photo collection on it and it would be nice to use more of these as photo features covering less publicised sections of the railways. Even if you were just able to provide some informative captions it will add to the general interest.
Our new book, Time for Coppernob by Denny Mallows is now available and it is a very good read. Promotional material is available if you can get bookshops and other outlets interested in stocking the book we will be on the way to getting the books sold.