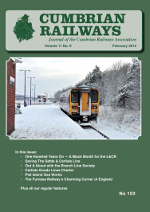 Phew!! It was a close-run thing, but right at the point of discussing a reduction of the number of pages in Cumbrian Railways, a knight in shining armour sallied forth to save the day. One particular damsel in distress was the Electronic Telegraph, the section of the Journal that was given over to publishing some of the material discussed on the CRA chat line. Since the well-deserved retirement of Norman Gray, ably providing the material for a number of years, a replacement could not be found. Your committee scoured the length and breadth of the land for a suitable champion to take up the challenge and defend this lady in distress. Then Lo! All was not going to be lost. At the Autumn meeting of the CRA, the gallant Sir David Orangejacket has stepped forward to pick up the gauntlet. David marks the return of this popular feature in this issue with a bumper catch-up of the interesting subjects that have been discussed over the last few months. My thanks to him for taking on this task. Many other line societies have also adopted the idea of reporting the traffic on their own chat groups, but I fear no censure when I say that I think ours is the best.
A lot of other positive things have occurred since my last missive. We are well on the way to establishing a photo-processing team. Three members have offered their services and are now working on photographs for our publications. Other members have offered their services to undertake drawings and maps. Rob Chambers has produced the first set of maps to be published, helping illustrate Ken Harper’s report of the Carlisle trip. Another draughtsman, Allan Jones, has produced further maps to go with the latest field trip report, which will appear in the next issue. Whilst it is gratifying that these members have stepped up to help, there is always room for more volunteers. The more the merrier to keep individual workloads reasonable.
John Hammond’s piece on the Quintinshill accident has generated a lot of further interest. On the strength of the article, an approach has been made by a documentary film company. They are keen to use John’s detailed knowledge together with the resources we have within the Association to make sure they are going to get the story straight. Further development in the story came when Chris Quarmby sent a copy to his friend, John Cowper, to try and see if there was any link between him and the driver of one of the engines involved in the accident. There indeed was a link and this brought forward more information by John on the original John Cowper together with other family connections with the railway industry.
The articles published in Cumbrian Railways have also been taken up by t’other CRA – The Caledonian Railway Association – to form a basis of further articles in their own Journal, The True Line. My thanks go to the two Johns and Chris for providing us with a clearer insight into this dreadful accident.
Help has also been given to a company preparing display boards to be posted at Carlisle station. These boards will give an outline history of the station to those thousands of passengers that use it every day. The station was rated as number four in a list of ten great English railway stations recently produced by English Heritage.
Another approach, this time from Copeland Borough Council, will see interpretative boards being placed at strategic locations around the harbour.
Needless to say, our web site and contact details feature on these boards as do a number of photographs from our archive.